An Emmaus welcome is open, dignified and for an unlimited period 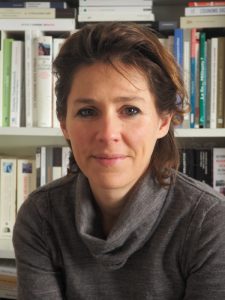 The practice of welcoming at Emmaus, aimed primarily at restoring the dignity of individuals, remains an innovative concept within the world of solidarity, states Axelle Brodiez-Dolino, a historian specialising in the history of poverty at CNRS, the French National Centre for Scientific Research.

Welcoming the most disadvantaged is not exclusive to Emmaus. How would you explain the differences?

Axelle Brodiez-Dolino: Overall, a distinction can be made between emergency shelters, on the one hand, that offer low-threshold accommodation, but which cannot be considered as a means for promoting ‘dignity’ for individuals (dormitory accommodation, etc.). On the other hand, there are organisations that offer a ‘dignified’ welcome, but that are not necessarily ‘open’, as generally they cost money and individuals can only stay for a limited length of time.

When the concept of community appeared at Emmaus, it was innovative in the sense that it was free, dignified, and open-ended. Today, it is still based on an agreement: companions who join the community gain social and economic benefits by working. Moreover, this activity has meaning within a community. The people who are welcomed regain their dignity, and in turn ‘restore’ themselves, mirroring the work to restore objects recovered and recycled within the community. Individual accommodation, which provides a private space, also helps to restore dignity.

However, you wouldn’t describe this as ‘unconditional’ welcome?

No, because there are conditions in return, such as the commitment to work or the obligation to respect the rules of community life.

In a contemporary world that places too much value on competition and performance, would you say we need solidarity, open and dignified welcoming of people more than ever?

Yes, absolutely. The situation (unemployment, migration, exile, climate change, etc.) has called for it since the 1980s. However, we can observe how civil society has reacted by cultivating increasingly strong solidarity work, to the point of constituting the real backbone of society in a dominant neoliberal system.

Is welcoming people a political statement at Emmaus?